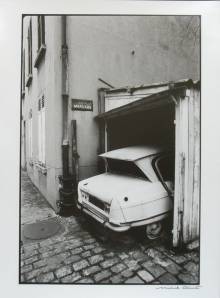 You can discover Paris in many different ways - and still you discover some still life in a rapidly changing world. You just have to open your eyes for a different perspective…

Michel Giniès (*1952 Aix en Provence), the well-known photographer, has taken a nice picture of a almost seemingly forgotten Ami6 in 1979 within a private Parisian garage situated at the Cour Margaux (Bercy). This scenery seems to have preserved some of the old remains of Paris.

The picture shows a scenery located at the „Entrepots de Bercy“, an area which had been forgotten for decades and seemed to be of no longer interest. Formerly that site had grown in the second half of the 19th century to one of the most important wine trading places, transported via the river Seine from the different wineries in France. With the upcoming individualization not only of traffic but also of transportation, the era following the second World War made the location near the riverside obsolete for trading. Many dealers left the site due to non-profitable business, and thus the „quartier“ was more and more losing it's attractivity and was left on its own.

Old halls, rottening wine barrels and also detoriating train tracks were the last remaining witnesses of this vanishing epoch in the 70s. But it also was the beginning of a change. The city government's restructuring initiatives also took care about this site, and like in many other places where old train tracks, industrial buildings and storages were abundant, the „Plan Programme de l’Est“ was the programme to re-vitalize and modernize a wide-spread area of the city.

A visit a couple of days ago - more or less 20 years after the shot has been taken - of course did not allow us to find the place nor the Ami6 again. All old halls and stocks are now replaced by modern architecture, the „Parc Bercy“ and also the pretty well-known „Palais Omnisports de Paris Bercy“ as well as the mighty ministery of finance are now the new landmarks.